NEW YORK CITY, New York — When it comes time to create a new-generation model, automakers have to first decide if a clean sheet reinvention is necessary, or if they can build on what’s already there. In the case of the new 2013 Nissan Altima, it was clearly an example […]

NEW YORK CITY, New York — When it comes time to create a new-generation model, automakers have to first decide if a clean sheet reinvention is necessary, or if they can build on what’s already there. In the case of the new 2013 Nissan Altima, it was clearly an example of the latter.

The current Altima has done, and is doing, quite well in the marketplace. Nissan clearly wanted this new Altima to stay the course.

You’ll immediately recognize the exterior design as a careful evolution of the current model. Highlights of the new sheetmetal include a more dramatic face, a longer sloping roofline, and a higher trunkline. Combined with a slightly wider stance reflecting its new, wider track, and more pronounced wheel arches, the Altima looks more upscale and more driver-focused than it ever has before.

But Nissan said handling and ride have been significantly upgraded, by a completely new multilink rear suspension which features “connect” bushing technology. Pierre Loing, Nissan’s VP of product planning for the Americas, told us that multilink suspensions offer fantastic control, but because they follow or “copy everything on the road” they can become stiff and race-car like.

“By introducing those bushings, you allow some movement on the rear suspension, and get rid of that copying effect… it allows some angle to the rear wheel… you improve the responsiveness of the whole vehicle.”

Another new handling aid of the new Altima is something called “Active Understeer Control,” which utilizes the VDC (vehicle dynamic control) system. Using brake actuators, and yaw and steering wheel sensors, it can detect and correct for understeer, before you encounter it, by appropriately braking the inside wheel.

Loing noted that unlike other anti-understeer systems, you will only notice improved handling, and not the system intervening in any overt way — it is designed for improved everyday driving, and not as an emergency evasion tactic.

The 2.5L I4 and 3.5L V6 engines return, but Nissan is touting greater fuel efficiency because the new body is lighter by 80 lbs, and because of the new-generation CVT. Compared to the previous transmission, the CVT has 40 percent less friction, and considerably wider “gear” ratios, allowing for very low revs at highway speeds. Targeted fuel economy numbers (in US mpg) for the 2.5L and 3.5L engines, in city/highway/combined modes are: 27/38/31 and 22/30/25. That highway figure for the 2.5L engine — 38 US mpg or 6.2L/100km — is not too shabby at all for a non-hybrid midsize sedan.

Speaking of hybrid powertrain, Loing said one is coming for the Altima, just not right away. And when it does, it will feature Nissan proprietary technology (the previous Altima Hybrid used Toyota technology).

The interior is all-new, and fully gadget and safety device compliant.

The 2013 Altima is the first Nissan vehicle to offer NissanConnect, a Smartphone integration system, which allows hands-free phoning, Google searches, streaming audio, etc. With the optional Hands Free Text Messages Assistant, Nissan Connect can manage incoming text messages as well. After hearing the text read out loud, drivers can respond with their voice, or with steering wheel switches, to select pre-set answers, such as “driving, can’t text” or “on my way” or “running late” or “okay” or a custom message.

A new and standard Drive-Assist display integrates more information right in front of the driver. The display is big, bright and can feature some 3D effects. Positioned right between the tach and speedo, it should mean less peering over to the centre stack.

Also new are NASA-inspired “zero gravity” seats. I sat in them, and didn’t float around in a weightless state, so I have no idea what they’re talking about.

All and all, the interior feels upscale and modern.

Not only is the Canadian base price down to $23,698 (versus $23,998 for the 2012 model), but now the base model is CVT equipped. The six-speed manual transmission is toast. Nissan Canada said only 5 percent of Altima customers currently opt for the manual.

Like the current Altima, the 2013 model will be built in Canton, Mississippi, with engines produced in Decherd, Tennessee.

Startup Myths and Models: What You Won't Learn in Business School by Rizwan Virk

Tue Sep 1 , 2020
Startup Myths and Models: What You Won’t Learn in Business School Rizwan Virk 288 pages, Columbia Business School Publishing, 2020 Buy the book » When I was at Stanford’s Graduate School of Business and at MIT’s Sloan School of Management, I marveled at how my economics professors could illustrate many […] 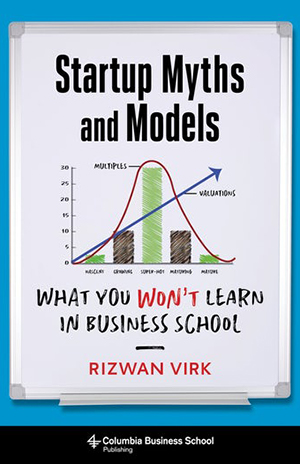