Batman is known as the ultimate ‘man with a plan’ – an ultra-prepared, impeccably skilled, unflappably cool crimefighter who always has the right tool for the job. And when we say tools, we mean the arsenal of groovy gadgets Batman keeps stashed away for just the right occasion – from […]

Batman is known as the ultimate ‘man with a plan’ – an ultra-prepared, impeccably skilled, unflappably cool crimefighter who always has the right tool for the job.

And when we say tools, we mean the arsenal of groovy gadgets Batman keeps stashed away for just the right occasion – from Batarangs, to grappling hooks, to Bat-shark repellent and beyond – some of which are just as iconic as the Caped Crusader himself.

So without further ado, here are the ten best Bat-Gadgets of all time!

Where does he get those wonderful toys? Well, once Batman is out in the field, he gets the grand majority of them from his Utility Belt.

How exactly he holds everything in this strapped-on wonder of pouches and pellets is a mystery that Batman will never reveal, but this is without a double the handiest accessory in all of comic books.

His Bat-Grapple attaches to it, his Batarangs fold into it, and of course, there’s that lead-lined pouch for special occasions. Not only is it the source of many of his big, fun moments, but it’s nearly as iconic as the bat symbol across his chest.

When the belt was briefly changed during the early days of Dick Grayson donning the cape and cowl, fans weren’t the only ones who had a problem with it – some artists just outright drew it the old way, ignoring editors and the new costume design.

Surprisingly enough, this is an actual gadget that actually comes from comic books before it was ever used in the cheesy (but iconic) Adam West Batman movie that spun off from the popular (and equally cheesy) TV show.

In 1958’s Batman #117, Batman used what he and Robin identified as his Shark Repellent on an underwater sea monster on an alien world.

So yes, Batman has Bat Shark Repellent, and clearly the writers of the 1960s Batman show and film are bigger Bat-fans than you are. Not only did he have it, but it even works on extraterrestrial sea monsters. Because that’s just how prepared Batman really is.

Speaking of being prepared, what about those very rare times when Batman might actually be overwhelmed?

Well, as unlikely as that is, Batman is ready for that, too. Lined sometimes through his entire suit, sometimes just in the cowl, sometimes just in his gloves, a massive electrical charge is always ready to deal that last punch when Batman happens to be incapacitated.

Nightwing, the former first Robin, took the Bat-Taser a little farther. Not only did he also have a single-charge built into his costume (despite it being a lighter, less armored suit than Batman’s), but Nightwing has also been seen to charge his dual escrima sticks.

Zapping foes silly is such a popular, graphic attack, that it was incorporated into the Injustice video games.

The Bat Computer is a true showing of Bruce Wayne (and his associates)’s knowledge. The computer that can do it all is always about 10 years advanced from anything we could have in our own bat caves at home and has always been a fun source of a little science fiction in the relatively grounded world of the Bat.

Oh, it’s also one of the most useful gadgets for writers; after all, that clue/alarm/case-breaking identification has to have its moment of exposition somewhere!

This may seem overly simplistic to be considered a ‘Bat-Gadget,’ but the smoke pellet, while readily accessible to other heroes, villains, and even real-life people, is also essential to Batman.

Sometimes, Batman uses the smoke pellets for their old-school ninja method of escape. Even the man known to disappear without a sound sometimes needs a little cover to silently vacate a bad situation. Sometimes, he throws the smoke pellets early, relying on advanced vision and rebreathers in his mask, or even just his own ultra-advanced martial arts training, to take down a large group of baddies with minimal collateral damage.

Let’s face it, ninja have used smoke pellets for centuries because they’re functional, and Batman will keep using them for the same reason.

Plus, it just plain looks cool.

It was one of the most visual, over-the-top and exciting moments of the ‘Year One’ arc of Batman. Cornered and outgunned, with the full weight of the Gotham P.D. ready to strike, Batman activates a high-pitched sonar device.

And then, they come.

If Batman wanted to establish the nearly supernatural link to Bats his crime-fighting persona had in one fell swoop, it’s nothing like adding hundreds of live, swirling bats to that swoop. As they fly through the police in the perimeter, causing all sorts of chaos, they then swarm into the stairwell, allowing him to dive down undetected and make his escape. In just a few short pages, he truly becomes The Batman, and the urban myth can begin.

The moment was such a perfect visual, in fact, that Christopher Nolan duplicated it in Batman Begins.

It may not seem like much of a gadget, as Batman obviously didn’t invent or conceive of Kryptonite, and in fact, he wasn’t even the one to forge it into a ring, easy to slip on if a certain alien superhero ever got out of line.

However, when Lex Luthor had already done the work of molding this piece of Kal-El’s home into jewelry, Batman secured the ring, having been given it by Superman himself, according to some tales. Stored in either a locked and secret compartment in the Batcave or the aforementioned lead-lined pouch so that Superman himself can’t see it, this ring is an insurance plan, a way of evening the playing field, should it ever come down to mano-a-mano fisticuffs with the Man of Steel.

Again, it’s such a cool visual, it was adapted as an attack in the Injustice video game series, in which Batman is Earth’s greatest line of defense a Superman gone bad.

With the grapple, he’s able to quickly scale buildings, boost himself into a glide, and of course, tie up and hang the more villainous members of Gotham City’s population from gargoyles and edges of building. It’s a device for travel, for show, for battle, for interrogation, and while oft-imitated, it is definitely as Batman-centric as they come.

It’s one of the most iconic images of any superhero, right up there with Spider-Man web-slinging or Superman floating with arms crossed looking down on his foes: Batman reaches to his belt, then up to the sky, and disappears in a burst of sound and a flash.

Sometimes just a hook attached to a rope for a simple throw, sometimes attached to a pneumatic gun for that extra oomph, the bat-grapple takes a tool of ninjas and thieves and uses it to extend Batman’s reach in a very literal sense.

From simple convertible to bat-adorned (and even shaped) speedster, from fast-traveling tank to high-tech flying car, the Batmobile has been a staple in Batman comics, film, animation, live-action, video games; basically, where there’s a Batman, there’s a Batmobile. The ultimate cool factor, the Batmobile has, in most incarnations, been a Bond-car on steroids. Q would kill to get under the hood and see the weaponry, both defensive and offensive, the conversion points, and of course those awesome rocket thrusters for when Batman really needs to catch a bad guy fast.

But the Batmobile is more than just a cool car with some big power. The vehicle also extends Batman’s mythos (Face it, when a souped-up car comes crashing toward you at 80 miles an hour with all sorts of weaponry roaring out, you’re gonna be a little scared), extends his reach across the city he’s sworn to protect, and acts as a mobile command center. From the Batmobile, Batman can access his Bat computer, keep spare gadgets, contact allies, and even occasionally simply hold a change of clothes.

It’s a big part of the fanboy fantasy. Sure, we’d love to pull bad-ass martial arts moves to take down 20 goons in one go, or soar across the sky on a grappling hook, cape, and a prayer – but what we all really want to do is get behind the wheel of the Batmobile, and kick it into high gear.

Recent movie versions of the iconic vehicle have been more like tanks than cars. But a first look at the new model for the currently in-production The Batman showed a version that takes things back to a more muscle car-inspired style.

There is nothing as iconic about Batman as the Bat itself, and that is most easily seen in two places: on the chest piece of his costume and in his hands as his all-purpose go-to weapon.

Like the Batmobile, there have been several incarnations of the Batarang. With its sharpened edges and bat-like design, it acts as one part shuriken, one part boomerang, and all-around awesome. He has had explosive Batarangs, electrified Batarangs, remote-controlled Batarangs, sonic blast Batarangs, and more.

He has used them to pin baddies to the wall, to cut the rope off a hostage, to knock a weapon out of the hand of an attacker, or just to straight-up take someone down. Attached to a rope it becomes a grappling hook, and held in his hand it becomes a close-combat knife.

It’s elegant, it’s simple, it’s iconic, it’s versatile – and that makes this the best Bat-Gadget of them all.

Sat Aug 22 , 2020
Children’s Books On Wheels distributed literature at a hot meals event at the Sleepy Hollow Multipurpose Building in Tamina, Wednesday, May 13, 2020. Each person that received a hot meal also received books for any children within the household. CBOW is now seeking donations of computers, tablets and accessories to […] 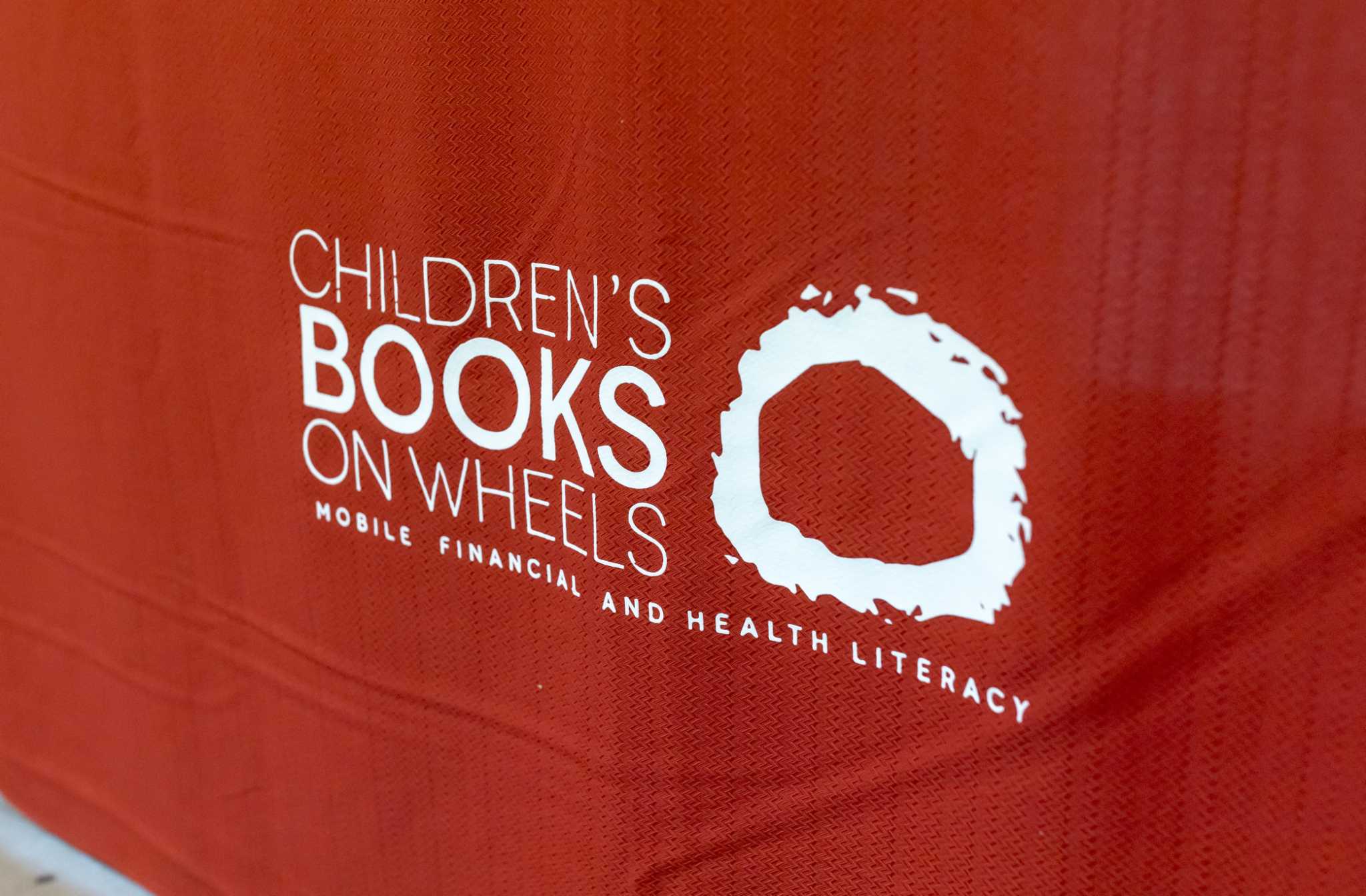