Broadband internet funding helping close Louisiana’s digital divide Published 3:36 pm Sunday, September 11, 2022 AT&T is one of the recipients of the GUMBO grant, and is currently at work in Sulphur installing fiber optic cable. (Rita LeBleu / American Press) Louisiana came out on top.  It was the first […] 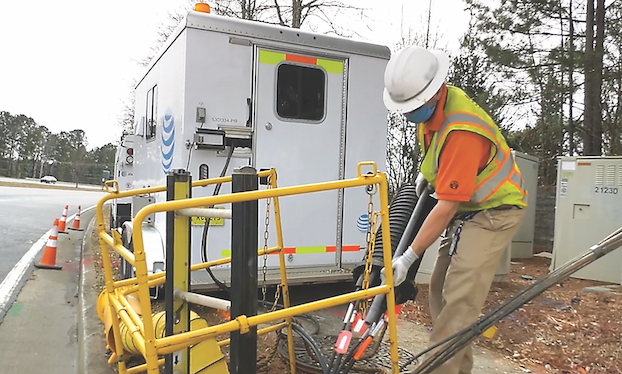 AT&T is one of the recipients of the GUMBO grant, and is currently at work in Sulphur installing fiber optic cable. (Rita LeBleu / American Press)

Louisiana came out on top.  It was the first state to receive broadband funding from the Infrastructure and Investment and Jobs Act (IIJA) passed into law last year.

The $2,941,542.28 grant is for the deployment and adoption of affordable and reliable high-speed internet throughout the state, the first of over a billion dollars expected to be allotted to Louisiana over the next five years.

What does that mean for Southwest Louisiana, and more specifically when can viewers in unserved and underserved communities expect to stream favorite programs without buffering?

Veneeth Iyengar, executive director of Broadband Development and Connectivity, is confident that enough funding is in place to allow for 1.5 million Louisiana residential and business addresses to have high speed internet access by 2029 or sooner. Two caveats exist.

“There are three large buckets of money through three different federal agencies focused largely on the same issue,” he said.

In the fall of 2020, the Federal Communications Commission awarded $342 million to 13 private internet service providers to 175,692 locations through the Rural Digital Opportunity Fund. A location is defined as an address of a household or small business.

“We have no control over this spending,” Iyengar pointed out. “Our office is managing the Granting Unserved Municipalities Broad Band Opportunities (GUMBO) grant program. That money is $176 million and from the U.S. Department of Treasury. “We expect to impact about 88,000 locations with that money.”

GUMBO was made available to internet service providers and electric coops. Those companies have to build within seven to 24 months, depending on signed agreements, and some will build in several locations.

“They have until Sept. 30 and then the clock starts ticking,” Iyengar said.

According to their website, Brightspeed will take over CenturyLink’s telephone and internet business in 20 states. AOP is ahead of the game and broke news of its work in Lake Charles last month in the American Press.

“In order for us to draw down on the bi-partisan infrastructure bill, we have to submit an initial proposal and five-year plan to the U.S. Department of Commerce National Telecommunications and Information Administration,” Iyengar said.

Access is only a part of the plan to close the state’s digital divide. Affordability, literacy and getting devices in locations are other goals.

Iyengar and his staff have been holding stakeholder meetings across the state in villages as well as major metropolitan areas. He says the outcome, to a degree, will fall on the shoulders of communities and particularly community stakeholders such as government and public safety officials who show up at these meetings and buy into doing what they can to smooth the way for companies. Community members can help identify pockets of unserved and underserved communities. “In three or four weeks, we have a meeting scheduled in Beauregard Parish,” he said.

Everything sounds like a go, except for two caveats noted by Iyengar. New funding dollars/service/programs cannot be used in areas already receiving federal funds for broadband – maps released later this year will specify these locations  – and there is a protest process in place for current companies.

Current broadband internet providers are holding up 19 grants, totaling $86.6 million, and there is no timeline for resolving protests, which hinge on whether the areas that applicants say they are seeking to serve are already served, according to an Aug. 29 Business Report article by David Jacobs. That’s why the maps are being developed.

A trained workforce is also a challenge, but plans are in place for that. Michelle McInnis, Senior VP Southwest Louisiana Economic Alliance, said the alliance has been meeting with providers in the area to try to help with workforce, another piece in the challenge to roll out the program in more needed areas sooner rather than later.

“We will be getting with training providers in our area to come up with a program to train technicians and installers that will be needed, as well as the initial subcontractors who will actually be doing the labor intensive, heavy equipment operations and underground installation,” McInnis said.

According to the FCC, the definition of broadband internet is a minimum of 25 Mbps download and 3 Mbps upload speeds. Broadband provides high speed internet access via multiple layers of technologies including fiber optics, wireless, cable and DSL satellite.

Stakeholders, such as government entities, ISPs, school boards or private companies looking to partner with the office on access, affordability and digital literacy issues can reach out to ConnectLa at [email protected] or call 225-219-7594.

Mon Sep 12 , 2022
uncommongoods Birthdays are always an exciting celebration, but as you hit the bigger milestones like turning 30, 40, 50 and 60, they start to become even more meaningful. And that means, finding a fun or sentimental gift idea for the birthday person also becomes more of a challenge. While diamonds […]