Jared Mauch, a network architect by day, wanted better internet at his home in rural Michigan. So he started his own internet service provider.

Jared Mauch, a network architect by day, wanted better internet at his home in rural Michigan. So he started his own internet service provider.

Long before the pandemic forced many office workers to depend on their home internet, Jared Mauch had been working from home for about two decades.

When he moved to Scio Township in 2002, an area in rural Michigan not far from Ann Arbor, his employer set him up with a great home internet connection — many of his neighbors at the time were still stuck with sluggish dial-up.

After a while, though, his bandwidth couldn’t keep up with his tech job and his growing family.

But when he started shopping around, he wasn’t happy with his options. The internet speeds from AT&T were painfully slow. Comcast wanted to charge him an up-front fee of $50,000 to expand service to his home. He opted for a third route.

Rather than shell out that kind of money only to depend on the whims of an internet service provider, the 46-year-old decided to create his own fiber ISP.

“I had every reason to believe that I would be able to execute and perform a lot of these pieces of it, and most likely be more able to bring the service to the community than, you know, a large company,” he told NPR. “I saw it as an excellent opportunity both to expand service and something I’m passionate about.”

He created the company in 2017 and secured permits in 2019 to start construction the following year. In August of 2020, he was officially in business. Just in time for his kids to start virtual school during the pandemic.

“It was great,” he recalled. “I had a home fiber that I controlled, and the ability to kind of control my own fate in the future.”

Along the way, he also hooked up his neighbors to his high-speed fiber lines. His business has grown to service 71 customers with reliable internet.

With the help of contractors, he’s already laid down 14 miles of cable across the county. Sometimes it takes half a mile of cable to hook up a single house in the rural area.

Now, Mauch is getting $2.6 million in federal funds to continue his work. Last year, a COVID-19 relief package allocated $15 million to Washtenaw County, where Mauch lives and where many residents lack internet service.

He was one of four ISPs awarded federal money to expand fiber internet service in the county.

With that money, Mauch plans to get 600 more homes connected. He told Ars Technica, which first reported on Mauch’s ISP venture, that he plans to lay down another 38 miles of cable for the project.

Mauch snapped a photo of 8,000 feet of conduit wiring that got stuck while moving it out of his backyard in Scio Township.

The first step to wiring up the neighborhood: mapping out where service is missing

That’s about a quarter of the work that needs to be done to get Washtenaw County to 100% reliable internet, says Chris Scharrer, the founder and CEO of DCS Technology Design, the telecommunications engineering firm contracted by the county to oversee its broadband gap-filling project.

Scharrer has taken inventory of broadband access in underserved areas as part of a countywide mapping project required to secure federal funding. He identified some 8,000 households in Washtenaw County that lacked reliable broadband in 2020.

About 2,800 of those homes that Scharrer identified were previously misreported as having service coverage. It’s a known issue due to inaccurate FCC mapping throughout the country.

“I actually find a lot of gaps, where they think that they have service when they actually don’t,” he said. “We find that that error rate can be as high as 50% overstated in some areas where it’s supposed to be served by a major ISP.”

In reality, he said, cable companies stop down the road, where the connection might not reach past long driveways, for example, or it could be cost-prohibitive for the homeowner to pay installation fees.

“It takes people like us to go out that aren’t restricted by anything and can go out and just visually map everything out, find out where it’s at and put it on paper,” he said.

Scharrer is hopeful that, by the end of 2024, the entire county will be served by high-speed broadband.

One of Mauch’s customer boxes with fiber cable is hooked up to the side of a home.

The federal government has been pouring billions into fiber infrastructure in recent years, especially in unserved rural areas — where experts say that the major telecom companies such as Comcast and AT&T often aren’t expanding because they don’t see a return on investment. With many rural homes separated by acres of land, Scharrer said, “there’s a fairly large cost-per-mile to build these systems and we just have to find ways to make it work.”

About 42 million Americans lack broadband access, according to BroadbandNow. And the pandemic brought the critical need for broadband to the forefront, says Gary Bolton, CEO of the Fiber Broadband Association, a trade organization that advocates for the deployment of fiber networks in North and South America.

He says people like Mauch aren’t waiting around for governments to get the money needed to get decent internet.

“We certainly see some people that I call mavericks that are taking measures in their own hands,” Bolton said. “A lot of the private citizens, they’ve actually been able to do it without a whole lot of federal funding.”

Now that government funds are starting to trickle in, Bolton said, there will be a lot more opportunities for smaller outfits and community co-ops to bridge the digital divide. Rural electric cooperatives, which operate as nonprofits and are owned by their members, are the largest and fastest growing segment in broadband.

But during this fiber gold rush, Bolton said the bar will be set high for which businesses will get the money to expand broadband services.

“We want to make sure that the funding goes to sustainable networks,” Bolton said, and “that any provider that gets money has the wherewithal to be in it for the long term. We wouldn’t want, you know, networks to be funded that are just going to be flipped by people just trying to make money.”

Building your own ISP isn’t easy

In a presentation he uploaded to YouTube, Mauch offers a how-to guide of sorts on how he built an ISP for his community. But he warns that not everyone is cut out to do it.

“This is totally something that people can do. But I have a really unique set of skills that I think would make it incredibly challenging for somebody else to do this without having two or three different people,” he said.

Before starting on this DIY venture, Mauch was already familiar with the inner-workings of ISPs. By day, he’s a network architect at Akamai Technologies, where he helps companies get content like video streaming to their customers faster.

Building an ISP that would allow him those same services in his own home was an ambitious side project — an expensive one at that.

In all, Mauch says he’s spent about $300,000 out of his own pocket building his service. But he says that he’s signed up enough customers at this point that he’s breaking even.

“My goal wasn’t necessarily to make a lot of money doing this — but be able to connect people that really needed it,” he said.

At the national level, access is still the first challenge. The FBA’s Bolton says the next hurdle is making good internet affordable across the U.S.

As for Mauch, he usually charges about $200 for installation, with monthly rates starting at $65, according to his company website. Although inflation has hiked up the cost of materials, he says he tries to keep his prices fair. For now, he seems to be keeping his neighbors happy.

“I have so far lost zero customers,” he said.

Sun Sep 4 , 2022
Signet Jewelers (SIG) is a jewelry retailer. It operates through brands such as Zales, Banter, Diamond Direct, Jared, and Kay Jewelers. The company plans to report its Q2 Fiscal 2023 earnings on September 1, before the opening bell. TipRanks’ Website Traffic tool hints at upbeat results. The report is for […] 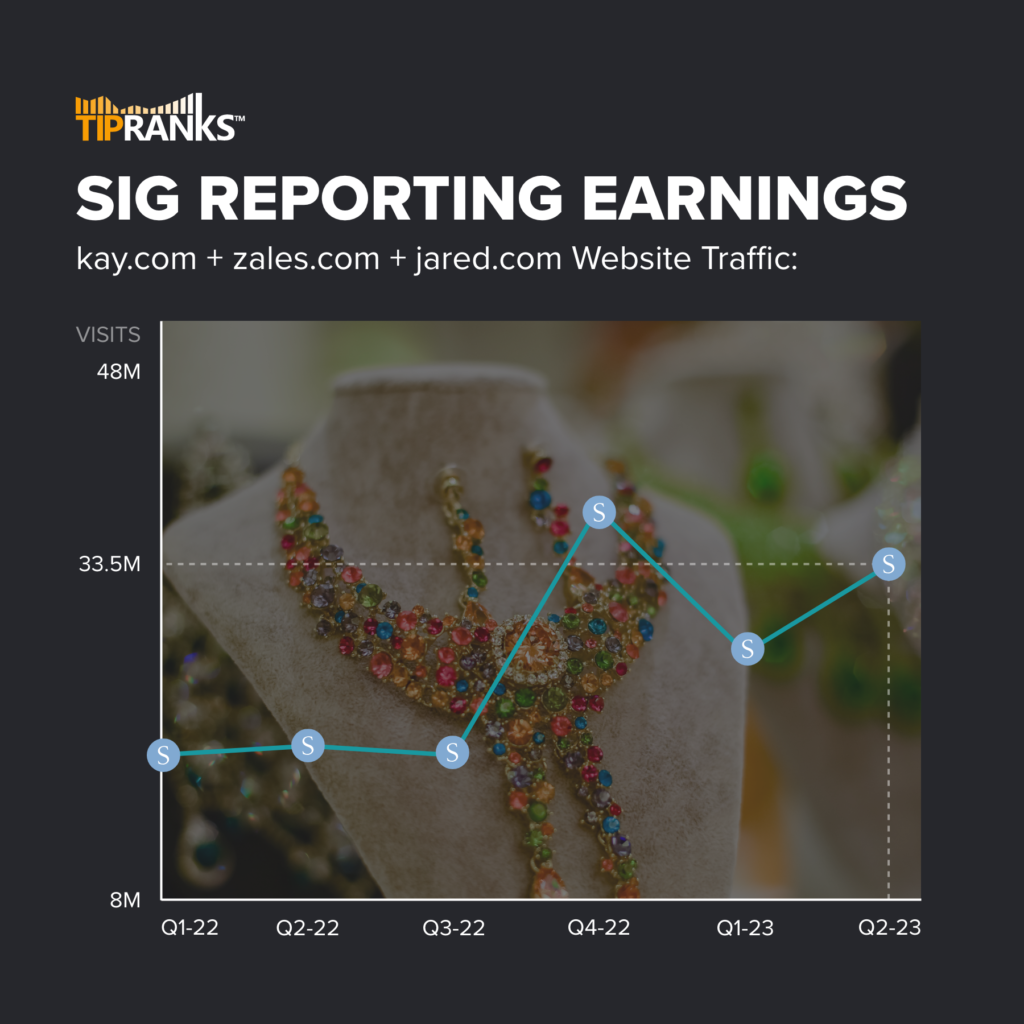