Matt O’Brien and Deb Riechmann, Associated Press Published 8:30 p.m. ET Aug. 10, 2020 CLOSE Cellular technology is about to make an evolutionary leap. 5G is almost here. But you’re gonna have to wait a little longer. Here’s why. USA TODAY The Pentagon plans to free up a big chunk […]

Cellular technology is about to make an evolutionary leap. 5G is almost here. But you’re gonna have to wait a little longer. Here’s why.

The Pentagon plans to free up a big chunk of its military airwaves in the U.S. for high-speed internet service, part of a broader push to get ahead of China in the deployment of 5G wireless technology.

The Trump administration announced Monday that it has identified radio spectrum used for radar defense systems that can be shared with commercial telecommunications providers without compromising national security.

5G is a new technical standard for the “fifth generation” of wireless networks that promises faster speeds; less lag, or “latency,” when connecting to the network; and the ability to connect many devices to the internet without bogging it down. 5G networks will ideally be better able to handle more users, lots of sensors and heavy traffic.

Thinking of buying a 5G smartphone?: Finding your carrier’s flavor of 5G requires a taste for investigation

But a June report by the Congressional Research Service said there aren’t as many frequencies available for 5G technology in the U.S. compared to other countries because the American military holds so much of the usable spectrum. Much of the investment in the U.S. has centered around the higher-frequency “millimeter wave” spectrum that offers fast data speeds but won’t likely work as well outside urban areas. That’s in contrast to China, which has been investing in building out networks using the less-expensive lower and middle bands.

White House officials said Monday that the Federal Communications Commission will be able to auction 100 megahertz of the military’s “mid-band” spectrum beginning in December 2021 for use as soon as mid-2022. It has previously been used for shipboard and airborne radar systems. 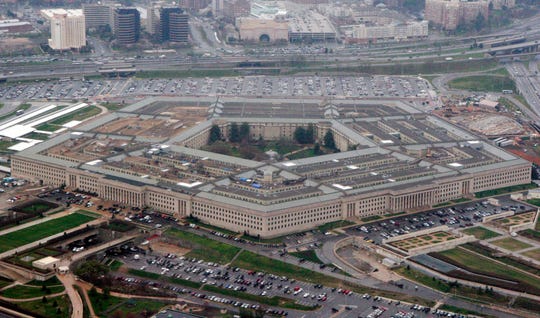 “This band has the ideal characteristics for 5G deployment — to travel long distances to ensure that all Americans have access to the network, while delivering ultra-fast and high performance that will power technologies in the future,” said Michael Kratsios, the U.S. chief technology officer. He emphasized this was an unusually fast timeline for transferring federal spectrum to commercial use.

FCC Commissioner Michael O’Rielly, a Republican who has been at odds with President Donald Trump’s administration on some issues, sent a letter to the president in April urging him to cut through red tape and get the Pentagon to give up some of its frequencies.

“The U.S. does not have the luxury of waiting years to provide spectrum for 5G services, especially when competitors such as China can move expeditiously to reassign spectrum frequencies by leveraging all the resources and power of their centralized, Communist regime,” O’Rielly wrote.

Federal officials have been working to give American companies a leg up in advancing 5G networks in part to thwart the global ambitions of China-based Huawei, which holds a leading share of the market for wireless equipment and is seen by Washington as a security threat. Huawei’s lower-cost equipment is popular with developing countries and is making inroads into Europe.

“Opening up this critical block of mid-band spectrum for full power commercial operations will enhance U.S. competitiveness in the 5G ecosystem,” said a statement from Meredith Attwell Baker, the trade association’s CEO.

Is Ultra Clean Holdings (UCTT) Outperforming Other Computer and Technology Stocks This Year?

Sun Aug 30 , 2020
Investors interested in Computer and Technology stocks should always be looking to find the best-performing companies in the group. Ultra Clean Holdings (UCTT) is a stock that can certainly grab the attention of many investors, but do its recent returns compare favorably to the sector as a whole? One simple […]