If you recall, I penned an article late last month about switching from Spectrum to T-Mobile Home Internet. The reasons were simple: T-Mobile promised faster speeds, a lower price, no contracts, and many freebies for new signups. After installing the 5G Gateway in my home, everything appeared to go exactly […]

If you recall, I penned an article late last month about switching from Spectrum to T-Mobile Home Internet. The reasons were simple: T-Mobile promised faster speeds, a lower price, no contracts, and many freebies for new signups. After installing the 5G Gateway in my home, everything appeared to go exactly as prescribed by T-Mobile. However, as soon as I discovered, T-Mobile Home Internet ultimately proved to be a disaster for me, forcing me to come crawling back to Spectrum.

But before we get to what made me cancel T-Mobile Home Internet (opens in new tab), let’s discuss the positives.

What I liked about T-Mobile Home Internet

For the two weeks I had the service, I routinely saw peak downloads of 500+ Mbps and uploads of 70+ Mbps. The download speeds were roughly 100 Mbps higher than my Spectrum internet service, while the uploads were three times faster. I achieved this performance even though my signal “only” bounced between three to four bars (out of five).

My service was rock solid during those two weeks, with no dropouts. I had consistent performance around the clock. Peak speeds dipped slightly during the evening hours, but downloads were still comparable to Spectrum, while uploads were still double. This was an impressive performance considering we’re talking about a wireless 4G LTE/5G connection.

Another positive aspect of the service is that T-Mobile promises no data caps or data throttling/ prioritization. Considering that fixed internet providers like Spectrum and Comcast institute mandatory data caps on customers in certain markets, this was a big draw.

Finally, there were the freebies. By signing up for T-Mobile Home Internet, you receive a 50 percent discount on YouTube TV for a year, one year of Paramount+ for free, a discounted Philo TV subscription ($15/month), and a free Amazon Echo Show 5 (opens in new tab) smart display/speaker.

However, all those benefits are for naught if the service ends up quitting on you.

My T-Mobile Home Internet happiness came crashing down roughly two weeks after activating the service. The workday started normally. I had just finished my morning meeting for work, I had Sling TV on in the background on the Roku TV in my office, and I was writing a follow-up to my original T-Mobile internet story (which eventually morphed into the account you’re reading now). Then, the Roku TV suddenly complained that it had lost its internet connection. Shortly after, my Mac indicated no internet connectivity when I went to refresh a webpage.

I got up, walked over to the T-Mobile 5G Gateway, and saw it was reporting “No connection.” Every 30 seconds, it would show one signal bar, then cycle back to the No Connection error. I chalked it up as a fluke and power cycled the 5G Gateway. It booted back up and displayed the same status message about a lack of connectivity. At this point, I was pretty annoyed, so I started tinkering with the tall, cylindrical device.

I swiped across the circular touch screen and came across the Alerts page, which showed that I had a critical error message: “All PDN IP Connection Failure.” Because I needed internet to work, I turned on the Personal Hotspot on my iPhone (Visible Mobile, which uses Verizon’s network) and wirelessly tethered it to my Mac. Next, I typed the error message into Google and found several threads on the official T-Mobile Community Forums, Reddit, and other sites. It’s a problem that many people have encountered and one that T-Mobile seems reluctant (or unable) to fix.

I tried moving the device to every room of my house, upstairs and downstairs. I even plugged it into an outside receptacle to rule out any interference issues – no dice.

I was able to get in contact with a customer service representative within a minute of calling the support number. First, the customer service rep had me perform a power cycle (which I had already done multiple times). Next, I explained that I was getting the All PDN IP Connection Failure error and was told to perform a hard reset of the device by pressing the reset button on the back of the device with a paperclip. Unfortunately, that resulted in the device rebooting and presenting the same error message. He also had me remove and reinsert the SIM card to no avail.

At this point, the rep put me on hold and said that he would “do a few things” on his end to ensure that I could gain a signal and hence have functional service. However, when this step didn’t work, he put me on another five-minute hold and told me that he found the reason for my outage: a cell tower upgrade. According to the rep, T-Mobile was upgrading the tower from 4G to 5G, which is why I saw the error messages.

I found that explanation problematic for two reasons. For starters, the closest T-Mobile tower is about a mile from my house, and I had T-Mobile phone service about two years ago – with 5G connectivity. Secondly, I later had a friend with T-Mobile phone service come over, and they picked up a 5G signal with 4 bars (the maximum) on their iPhone.

Even more troubling is that the rep said this “upgrade” started that morning and would go on for 48 hours, which again seemed very odd. I was told that nothing else could be done on his end and to wait for the upgrade to be completed, then try again. Forty-eight hours without internet in the work-from-home age? That’s absolute torture.

The most I’ve been without internet with Spectrum in 20 years (even when it was called Time Warner Cable) was about 30 minutes to an hour. And that happened maybe once every two years or so. Waiting 48 hours was a bridge too far, but I complied.

Without access to home internet via our Orbi mesh router, all of our smart devices went “dumb.” No Echo speaker access, no control over our Ring cameras, no streaming TV services, etc. The best I could do was tether my iPhone to our Smart TVs around the house to watch Sling TV and Disney+ for the kiddos. During this time, I revisited the T-Mobile forums and Reddit to see what other people were experiencing.

Apparently, I’m not alone with the All PDN IP Connection Failure

Not surprisingly, other users say that they encountered much of the same commentary from T-Mobile customer service. Many never had service restored, even after having a replacement 5G Gateway sent to their homes. Here’s a sample of the responses (opens in new tab) from the T-Mobile forums (opens in new tab) and Reddit:

“I am having this “All PDN IP Connection Failure” error code as well. I have called T-Mobile’s support for 5 days in a row and no one can tell me what it means.” – eshoemake

“I got T-Mobile home internet just over 2 weeks ago. Had blazing speeds, everything was working flawlessly. Then a week ago I lost all connection and kept getting the ‘PDN IP Connection Failure’ on my Nokia trashcan. Multiple calls/hours on the phone, multiple factory resets, etc, didn’t fix the issue. I’ve been sent 3 different Nokia trashcans in the past 6 days since Tech Support didn’t know the cause. All 3 do the same thing. I have not had internet for over a week now.” – Satcaster

“Why hasn’t anyone from T-Mobile replied? I’m having the same issue and haven’t found any reliable fixes from internet searches.” – Tannerqmartin

“I have been having the same problem for the last month. Still no internet. No resolutions. No answers. And T-Mobile seems clueless. So I have paid for a month of nothing. Many factory resets, swapping SIM cards, moving to different areas, new gateway, and still nothing.” – SJ_Traydrelia

“I had to cancel the service now ever since I got this error. I called the support line practically daily and spent ~1hr troubleshooting. It was just fine since I got it last year. Nothing changed in my setup at home, no new devices, etc. Internet connectivity had been unresolved for 7 days.” — spindceate

Calling back to T-Mobile customer service

It was rough (I know, first-world problems), but we endured 48 hours, and the service never came back online. At this point, I was fed up. So I called customer service back and was told they didn’t know when the “upgrade” would be finished or when I’d get my service back. At that point, I told them to cancel the whole thing and return to Spectrum.

Maybe it was a rash decision, but I don’t have time for BS. Either your service works, or it doesn’t. And telling a customer to wait 48 hours for internet service to be restored is unacceptable, especially just outside the second-largest metropolitan area in North Carolina and home to Research Triangle Park.

It was at this point that I went crawling back to Spectrum. Since I never got rid of my Arris Surfboard cable modem, reactivating service was as simple as calling in and signing up for service. If there’s any consolation, Spectrum signed me up for three years of service at the same speeds I was spec’d for previously (500/20) at $49.99/month – a $20 discount compared to my previous rate. They say that the price is good for 36 months, after which I will likely have to perform my yearly dance with the retention department to maintain that pricing.

T-Mobile Home Internet was great when it worked, and I really wanted to give the service a chance. But leaving our family high and dry for two days with no ETA on restoring service, and the reports of customers who have never gotten their service back, killed any hopes that I had for T-Mobile Home Internet.

I did reach out to T-Mobile’s PR team after canceling the service, inquiring about the All PDN IP Connection Failure error and tower upgrades, and received the following response:

Thanks for your patience as we sorted out what happened. It looks like there were upgrades in your area that probably caused your service disruption. However, our team looked into the issue and expects the issue to be resolved. If you’re interested, we’d love to get you signed up again for Home Internet. Let me know if you’re interested.

I received that response back from T-Mobile within 24 hours, and apparently, a team was tasked with finding the true root cause of my outages – I doubt that a regular T-Mobile Home Internet customer would get that treatment, but I digress. Also, I’ll never know if T-Mobile actually resolved the problem because the 5G Gateway is now back on its way back to the company. And my request for an explanation for the All PDN IP Connection Failure error also went unanswered.

Note: As with all of our op-eds, the opinions expressed here belong to the writer alone and not Tom’s Hardware as a team.

The Best Fishing Gifts for Men

Thu Aug 25 , 2022
Courtesy of Retailer Not all fishing gifts are created equal. While singing bass and fish-themed aprons are cute, they’re not really going to get you on the water more or improve your angling game. Fishing types need to be showered with gear that will have them enjoying the sport even […] 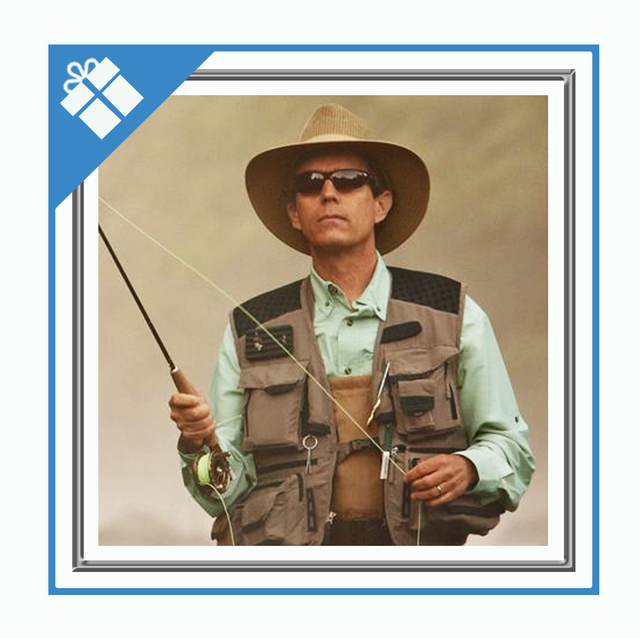